Well, firstly, more than anything, I should say WOWSERS and THANKS! Yesterday was by far the busiest this blog has been. Thanks for reading (and, hopefully, coming back !).

This is another super shape mod (I see a trend here….). Another really wel made puzzle. And happily, another four by four mod.

I don’t think anyone can argue about the amazing things Tony Fisher has done (and is still doing). His original 3×3 Fisher cube has been around for around 30 years now as well as countless other designs, mods, solving methods and WORLD RECORDS!

This bigger version is made by Moyu – same as yesterday’s axis cube. Really well made, nicely turning, doesn’t catch, nice stickers. This was a gift, I think for my birthday earlier this year – I’d like to say they know me so well, but they just know where my Amazon wish list is!! 🙂

It’s not too bad to solve if you can already solve a 4×4, but as I mentioned the other day – I tried it layer by layer and came a cropper with the last layer. I ended up with two edges/corners/I don’t know whats rotated and got really mixed up. I had to start from pretty much scratch. I’ll go back and try again, but for now – too many puzzles to solve and blogs to write (in good news, the final piece for the 10×10 is on the way. Thanks Cubicle!!).

Anyway, here he is scrambled – available from most big cube stores for around £20. I suppose the question is now – do I get the 4×4 windmill…. 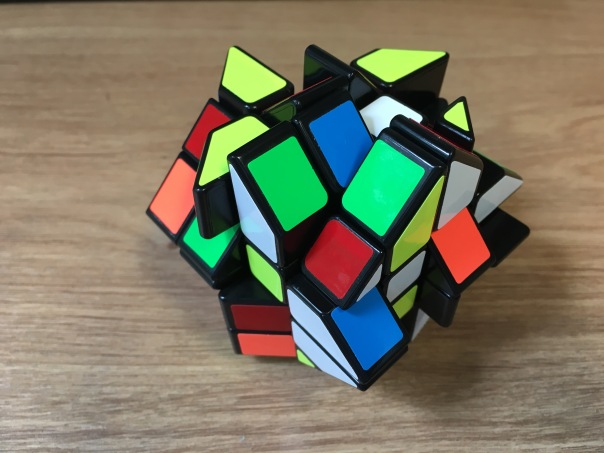 Have a good weekend, you crazy kids!